First day high! Time to finally begin the long-delayed ASEAN trip. First stop: Hanoi. We arrived at 1230AM (Vietnam time) through Cebu Pacific (the smallest international airplane I’ve ever been on). I was surprised that they didn’t require an arrival card for Hanoi. Upon deplaning I was through immigration and out into the darkened arrival hall in less than 30 minutes. I decided to stay here for the next 3 hours since I was trying to catch the 520 AM bus to Cat Ba at the Luong Yen Bus station. I withdrew VND from my BPI account and bought a 64k Vinaphone sim card for 200k VND and subscribed to the 650 MB data package (send M50 ON to 888).

While waiting I met Ricky, a fellow filipino who happened to be travelling a similar route to mine. He was also waiting for daylight to better navigate through Hanoi. We passed the time talking about the different places we’ve been to and the places we’d like to visit.

After a short nap I took a cab to the bus station for 350000 VND. Pricey yes, but I wanted to get to Cat Ba as early as possible to maximize my time there. Little did I know that I could have taken the 7 AM trip to Cat Ba and would have arrived at the same time. Curse you Hoang Long for removing the earliest ferry ride!!! As I arrived it suddenly started raining. Hard. If I had not brought garbage bags for such an occasion all my stuff would be drenched.

By 5 AM I started looking for the bus to Cat Ba. The first Hoang Long bus I approached waved me in and as I was asking about Cat Ba the driver and conducted were both emphatically nodding. I stepped into the bus and immediately saw the rows of sleeper bunks. Crap. I never read about sleeper buses to Cat Ba. I asked again and the driver showed me his signboard: SAIGON. Oops. I got out of there quickly and found the Cat Ba bound bus beside it. These guys were determined to leave on time. They briefly showed up near the ticket booth,  started beeping to get attention and three other passengers (Spaniards Borja and Lucia and a local) got on. No wonder they removed the 8 AM ferry trip.

The Hoang Long bus to Cat Ba is the most hassle-free way of getting to the island. You have to transfer thrice in total but you only pay for one fare (210k VND). This is cheaper than taking a train or bus (60-75k VND) to Haiphong then taking the hydrofoil to Cat Ba (200k VND). However, there are only 3 trips per day back and forth. I would think that during peak seasons they would run the earliest (8 AM) ferry to accommodate the tourists.

We arrived in Haiphong at around 8 AM where we were notified of the 10 AM departure of the speedboat. So myself, Borja and Lucia were forced to wait for the arrival of the 7 AM trip from Hanoi.

We arrived in Cat Ba town by 12nn, and I checked in at Cat Ba Hostel (946.78 Php for 2 nights through Agoda).I was later informed by Borja that they were able to checked in at Cat Ba Seaview hotel for cheaper (8 Usd per night) for basically the same amenities. I guess it really is better to do walk-ins during the off-peak season. I booked a Halong Bay – Lan Ha Bay tour for the following day (440k VND) at the hostel.

My first meal of the day was lunch at one of the carinderias near the hostel where I reacquainted myself with the always delicious Vietnam iced coffee with milk (100 VND for the meal). Nothing too special aside from the coffee but it was filling.

I then walked around town,  eventually reaching Cat Co 1 and 2 beaches. The weather was not as sunny as I would have wanted but at least it stopped raining. The water temperature was perfect. The kind of water that you would want to swim in for hours.

The next stop was Cannon Fort (50 VND entrance fee). At the top, there are several points with beautiful views of Cat Ba and the surrounding islands. From the East observation point,  a pair of binoculars let’s you see the floating community nearby. It’s best to bring your own bottle of water as they charge 25k VND for 500 mL whereas you can get a 1L bottle in the town for 15k VND.

View from the South Observation point 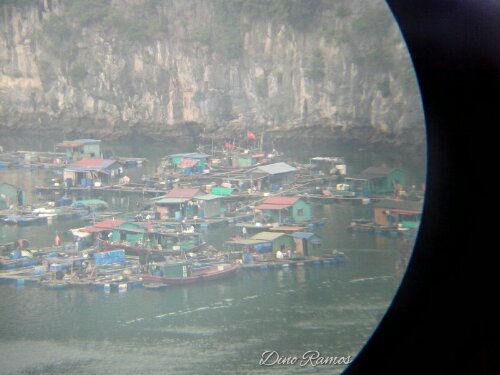 View of the floating community

View of the floating community

After enjoying the air,  I walked to Noble House for dinner and a beer. The pho wasn’t as good as the one in Saigon but it was cheap and big to make up for taste. I saw Borja and Lucia again after dinner as they were returning from Cat Co and we decided to have some beers tomorrow evening. I headed back to the hostel to catch up on some sleep.